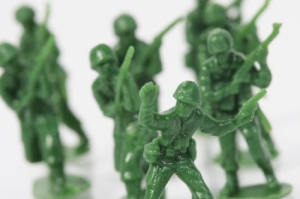 This past week I had a humbling lesson in mercy, love and letting go. I’m sharing a picture of my flesh side rearing up and God’s lesson to me about it – so prepare yourself.

Rewind several months ago. . . Sitting in my office, I heard this strange noise outside our house. I went to investigate. I discovered a rainbow of colors that created an abstract piece of art on the side of our house. I was starting to get upset. As I looked down, broken balloons marked with paint fluttered across the driveway. As my eyes widened in disbelief, I saw little toy green men resting quietly. Now I was starting to get really upset. I looked to my neighbor’s house. Their balcony was perfectly positioned for this target practice on my house. But I saw no one. I stomped over and rang the doorbell – nothing. Knocked on the door – nothing. I lingered back inside and the noise started again. Looking out the window, I saw mischievous delight on my neighbor’s son face and his friends. I ran outside – no one. What a fun little game – errgg. As I looked around the little army men were everywhere – in the planters, in the top balcony, on the driveway! Now I was really upset. I’m going to call the police, the HOA. Stop. Breathe. I needed to calm down. Get some perspective. Then the noise stopped.

Days later, I finally got a hold of my neighbor and she said they wouldn’t do it again. Wow, it amazed me how frustrated I got. I mean they are just kids. Look at the stuff I did. In hindsight, my passion came from a deeper issue in regards to respect. (Our reactions are rarely just about the moment, but filled with the past) So, I got a little carried away in my frustration. But I remained civil with my neighbor and it worked out. But for weeks after as I found those little green men here and there, I tossed them back into their yard. I know. You don’t have to exhort me. I know.

Fast forward to recent weeks. A car sat in front of our house for days and nights. Occasionally it moved but rarely. There’s a “no parking on the street” policy in our neighborhood for residents. Visitors can but not extendedly. We don’t have a lot of parking space and it was taking up the little room we had for our visitors. Plus it was an eye sore and it’s kind of a pet peeve. Anyway, after weeks – I had enough and called the HOA security. They came out right away. Moments later the owner moved his car. The security guard said something about possibly a ticket . . . thanks officer. (I know it’s ugly, but the honesty is the only way to show the powerful lesson gained.)

Then this past week as I was returning from a walk, I saw smashed eggs – several on the side of our house (same side as the rainbow art) and several on the driveway. First thought – it must be those little rascals. Immediately my blood pressure rose.

I called my neighbor. . . she said her son didn’t do it but in fact they had an egg on their driveway on Halloween. I still thought it was them. I mean who else could it be? But I let it go . . . yeah, right.

Then the next day as I was taking out the garbage, I saw two more eggs splattered on the driveway. Those weren’t there yesterday! I took a deep breath and went inside to have my quiet time with God. This is what I learned.

When I called the HOA security about the car, I didn’t even think of going over to my neighbors and asking them not to park there, which would have been the neighborly thing to do. My first response was I’ll show them and call out the big guys. I hadn’t really forgiven them of pelting my house with paint and army men. So, my ill-will emotions just stacked one on top of another. It’s much like a wife getting upset at her husband for squeezing the toothpaste from the middle instead of the end – it isn’t about the toothpaste; it’s build-up from the past. So I reacted.

I’d been harboring ill-will toward them since the rainbow-army men event. Not that it was something I thought about it, but my reaction to the car revealed my heart. However, I didn’t fully realize what I felt until the egg episode. I hadn’t forgiven. God taught me through this that mercy is letting go and giving someone a clean slate; like you are meeting them for the first time. That means you aren’t harboring any ill will – anger, resentment, bitterness. So in a sense, each new episode is disconnected from the rest – emotionally speaking. Make sense? I never thought about it quite like that before. Forgiveness isn’t getting in harm’s way again, if someone harmed you. It’s establishing boundaries when needed, but it’s giving others a clean slate so your following emotional reactions aren’t fueled by the past. So there isn’t a seed of anger hiding in your spirit ready to jump out at the next opportunity.

When we give others a clean slate, then the love of God is able to flow through us to them. If there is no love flow, then we haven’t truly forgiven from our heart. And often those who upset us are the ones that need God’s love the most. Loving others is part of our purpose as God’s family because unlike the world we love with His love which is powerful in others’ lives. Love like you’ve never been hurt. It can change others. Now, unexpectedly, I feel love for my neighbors. Incredible! The blockade has been removed and love is flowing. I want to bake cookies or give them flowers for something. It’s amazing how when God teaches us a lesson He transforms our heart in the process to carry out His will and that is the power of HIS instruction and not someone else’s.

Psalm 18:35 “So My heavenly Father also will do to you if each of you, from his heart, does not forgive his brother his trespasses.”

God has given us a completely clean slate always. We are pure, blameless and perfect in His sight and I’ve done far worse in my life than splatter paint, pelt army men or throw eggs. We need to give others what He has given us. But it isn’t us but God who cleans that slate for us giving us the ability to truly love. His love is real, powerful, and tremendous. Matthew 18:21-22

The world is about revenge, getting even, not letting someone off the hook. But that attitude is more damaging to us, than anyone else. Anger and the like eat away at our soul, verses love which replenishes and heals. Ill-will prohibits the flow of love. Whether it was my neighbors or not who threw those eggs I don’t know. But I called her and established a clean slate which from the sound of voice she appreciated the gesture. I’m thankful for this lesson. Because now in this new awareness I have some other people in my life of whom I really need to give a clean slate to, and I’m confident God will make that happen in me.